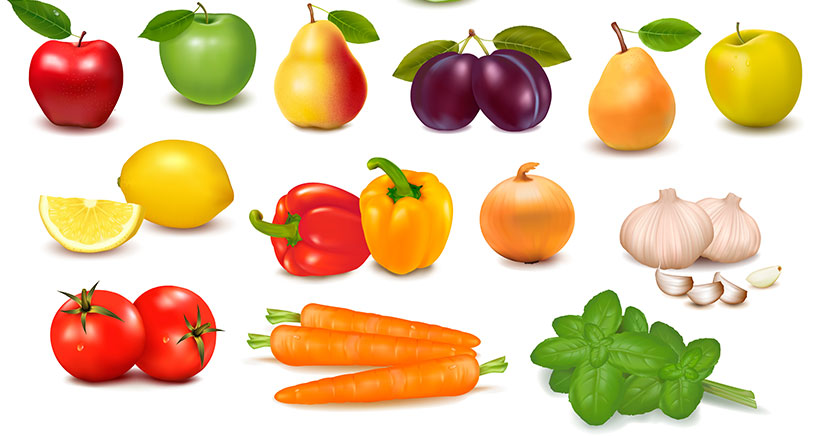 Welcome back to our series for foodservice professionals where we are discovering and uncovering details about the produce used every day in your commercial kitchen.

From fun facts to functional food tips, this guide is an opportunity to expand your culinary repertoire, learn about fruit and vegetable varieties you may not be familiar with, get practical tips on cooking and baking with various produce, and stock up on new recipes that are sure to dazzle and delight your customers.

What You Didn’t Know About Cucumbers

As we discovered in Part I of this series, contrary to popular belief, cucumbers are officially a fruit and not a vegetable. Either way, however, they are nutritious, delicious, and have been part of the human diet since ancient times. Originally grown in India and used for both culinary and medicinal purposes, some of cucumber’s therapeutic values include its soothing and cooling effects on the body which can alleviate sunburn, reduce swelling, reduce skin irritations, and nourish the skin. It also has anti-inflammatory, antioxidant, and anti-diabetic properties (helping regulate blood sugar levels), while its high water content helps hydrate the body and get rid of toxins and waste materials.

Nutritionally, cucumbers are low in calories, fat, sodium, and cholesterol. They contain calcium, vitamins K and D, several B vitamins, small amounts of fiber, potassium, and magnesium, and high amounts of a bitter-tasting nutrient known as cucurbitacin which is thought to help stop cancer cells from reproducing and prevent atherosclerosis (the buildup of plaque in the arteries which can lead to heart attacks and stroke) and they are also welcome on keto-friendly menus.

While you and your customers are no doubt familiar with the most commonly available type of cucumber, the dark green skinned English cucumber or ‘hothouse,’ there are a whole host of lesser-known cucumber varieties on the market, each more unusual and fascinating than the next. As you digest this new information, think of ways you can update your foodservice menu and spice up your recipes by including a wider range of this popular produce. 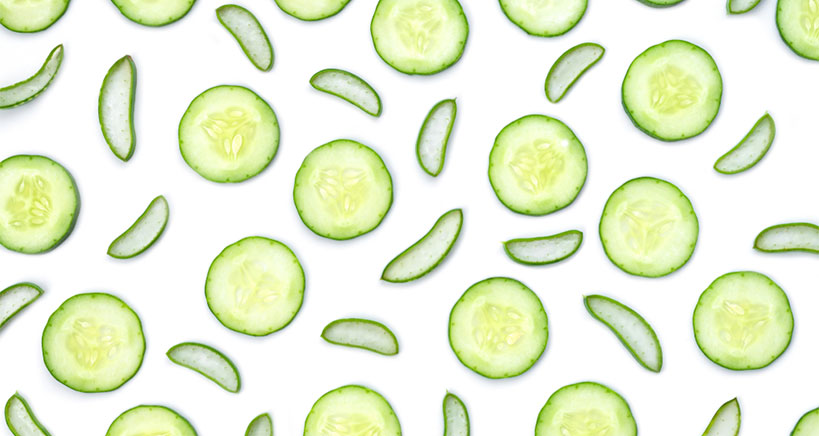 How to Use Cucumbers in Recipes

Served whole, sliced, diced, or crushed, there are many savory ways to add refreshing cucumbers to recipes, such as:

Did you know cucumbers can act as a natural ink eraser? Next time you write with a pen and make a mistake, try using the cucumber’s outside to erase your error…

What You Didn’t Know about Potatoes

Currently the world’s fourth largest food crop, potatoes (aka spuds, tubers, and tots) have been a dietary staple for millennium. Originally grown in Peru by the Incas, they were brought to Europe by Spanish Conquistadors and quickly spread across the continent.

Rich in vitamin C, fiber, iron, and essential vitamin B6, did you know that a single potato contains more potassium than a banana? In fact, it contains 18% of the recommended daily value.

Little do most people know, but there are literally thousands of potato varieties to choose from. To help you select the best spuds to add to your recipes and to breathe new life into your eatery’s menu, here is a handy guide to some tuber basics. 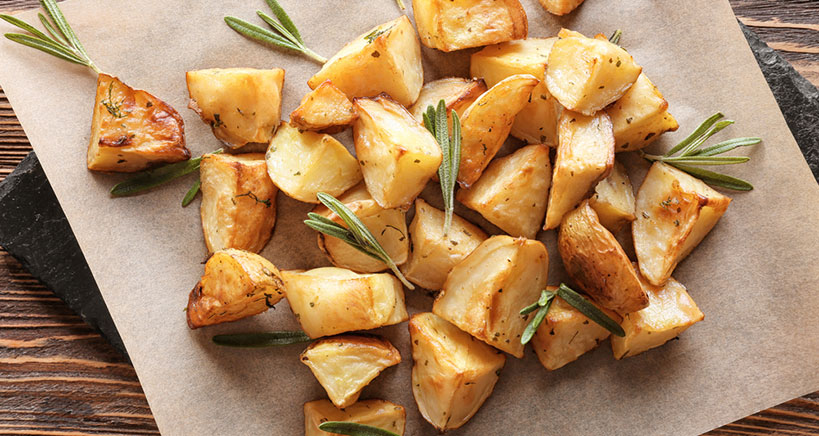 The Many Ways to Love Potatoes

If there is one thing you need to know, it is this: All potatoes are not created equal. However, all potatoes can be broken down into three main categories: Starchy, Waxy, and All-Purpose. These properties significantly effect the way tots cook and bake and hence which types are appropriate – or not – for the specific dishes you are preparing.

In a nutshell, starchy potatoes are ideal for boiling and baking as they absorb water and puff up during preparation, giving rise to a convenient crumbly consistency. Classic examples: Idaho Russet and Katahdin potatoes. Highly absorbent, they are perfect for boiling, baking, making French fries, and treating your customers to some mouth-watering mashed potatoes (think soft, creamy, fluffy texture paired with melted butter or cream…). However, these are not your number one choice for gratins, potato salad, or any recipe that requires the potatoes to maintain their shape.

Waxy potatoes such as the Red Bliss and French Fingerling varieties repel excess water, retaining their structure and texture. This makes them ideal for roasting, scalloping, stewing, potato salad, casserole, and gratin recipes.

Finally, as their name implies, all-purpose tubers feature a ‘medium’ starch content that falls somewhere in between, and they work well in almost any cooking application. A classic example is the Yukon Gold potato. Buttery and smooth on the inside with an outer thin and flaky yellowish skin, they are truly an all-purpose star in the world of vegetables. Some great Yukon Gold recipe ideas include potato bourekas, potato soup, and a wide variety of potato salads.
To treat your customers to even more variety, check out some of the following standout types of potatoes:

Potatoes were the first vegetable grown in space! In a NASA-University of Wisconsin partnership, seed potatoes were tested on the Space Shuttle Columbia in 1995. Subsequently, in 2004, NASA used a Chinese technique to make the ultimate chamber-grown spud. It was dubbed Quantum Tubers™.

Though they share the same name, sweet potatoes are root vegetables and only loosely related to the potato.

A main cause of the Great Famine in Ireland (1845-1852) was a potato disease called the potato blight. The shortage of spuds led to the death of about 1 million people who depended on potatoes as a food source.

What You Didn’t Know About Cranberries

A chef’s favorite for use in baked goods, drinks, sauces, and of course as a traditional Thanksgiving accompaniment to turkey, cranberries are a surprising all-star in the world of fruits and berries. They are one of the few authentically native North American foods, along with Concord grapes and blueberries, and despite the crimson-colored fruit’s natural sourness or bitterness, they are easily processed and used to make cranberry juice, cranberry sauce, and compote or jelly. Dried sweetened cranberries are also available year-round.

If you want to liven up your menu, cranberries literally pump color and flavor into almost any dish, and you can add them to hot and cold cereals, pancakes, salads, yogurt, salsa, couscous, breads, muffins, cakes, scones, and more. Top-selling cranberry juice is also added to many popular alcoholic drinks and cocktails, such as the Cosmopolitan.

And did you know that Native American tribes originally had numerous names for the berries? Among them: “Crane Berry” due to their resemblance to the head and bill of the crane bird, “Ibimi” meaning bitter berry, “Sassamanesh: by the Easter Indians, “Atoqua” by the Algonquins of Wisconsin, and more.

Small but mighty, your health-conscious customers will be delighted to learn that cranberries pack one heck of a nutritional punch. Naturally very low in sugar, they are also a good source of fiber, vitamin C, vitamin E, vitamin K, copper, and antioxidants. Multiple studies have proven that eating cranberries or drinking cranberry juice can prevent urinary tract infections and even act as an alternative to antibiotics. In addition, the fruit is heart-healthy, can help lower high blood pressure, prevent stomach ulcers, and has anti-cancer benefits.

Finally, here is some cranberry trivia you may not know about: Cranberries can improve oral health by inhibiting bacteria that cause cavities, gum disease, and plaque. In fact, several brands now sell cranberry-infused toothpaste and mouthwash.

We hope that learning some uncommon facts about common fruits and vegetables has stirred your culinary creative juices to explore and experiment with these popular types of produce.

We leave you now with one more juicy bite of ‘fruit facts’ to share with your restaurant’s customers: Did you know that scientifically, bananas are called musa sapientum, which means “fruit of the wise men”?