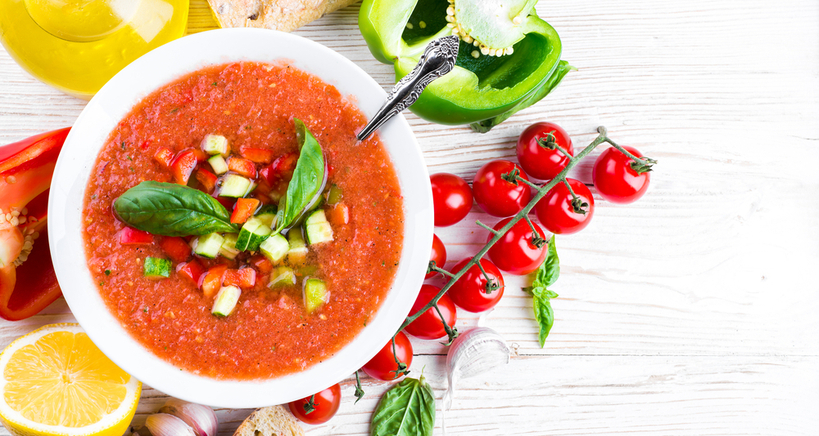 Summer soup season is here, and the cold soup selections are (ironically) selling like hot cakes. Leading the pack, however, is gazpacho, the quintessential tomato-based chilled soup, appearing on restaurant menus everywhere. Featuring the aromas, flavors, and colors of the season’s top produce, fresh, cold gazpacho is a customer favorite.

With its origins in Spain, there is a famous Spanish saying: “De gazpacho no hay empacho” — there’s never too much gazpacho. If you work in foodservice and want to boost business this summer, it’s time to learn more about what has kept this dish so popular and what’s new in gazpacho recipes today.

In yesteryears, the southern Spain area of Andalusia was an agricultural hotspot for vineyards, olive trees, citrus groves, and more. Each day, poor field workers were allotted a food ration of stale bread and water which they would flavor with garlic and salt and add vegetables such as tomatoes, cucumbers, and peppers. They would pound the ingredients together in a mortar or large wooden bowl called a dornillo, creating a liquid that quenched their thirst and sustained their bodies under the hot sun.

Over time, the soup began to spread. It evolved into different varieties, became increasingly popular, and even debuted on menus of sophisticated, high-end restaurants. Traditional gazpacho recipes use tomatoes, tomato juice, or hot salsa as a base. Nowadays, chefs are experimenting with recipes for watermelon gazpacho, cantaloupe gazpacho, and even adding seafood to the mix.

As a versatile dish that can be served for lunch, dinner, or as an anytime refresher, savvy caterers and restaurant owners are giving gazpacho a leading spot on their menus, increasing both business and profits.

Hungry for a savory bonus tip from the pros? Toss leftover gazpacho into pasta or use it as a surprise salad dressing.

Gazpacho varieties can be categorized by color or place of origin. Check out the following 411 to decide which type of gazpacho will most appeal to your customers and keep them coming back for more.

Red Gazpacho: For the best tomato-based gazpacho, use sweet, ripe tomatoes, removing the skins and seeds as follows: Lower tomatoes into boiling water for 30 seconds. Lift, plunge instantly into a bowl of cold water, and let the extreme temperature change allow the skin to effortlessly slide off. Cut the tomatoes in half and gently squeeze out the seeds.

Salmorejo: Originating in Córdoba, this dish is also tomato-based, however containing no water and with the addition of extra bread, the resultant dense texture is more like a dip. Traditionally garnished with diced boiled eggs, salmorejo is a perfect menu selection for sharing with family and friends.

White Gazpacho (Ajoblanco): Hailing from the Granada and Malaga regions of southern Spain, Ajoblanco (meaning white garlic) ingredients include bread, garlic, olive oil, and almonds. Depending on the season, garlic flavor is offset by the sweet addition of apples, melons, or grapes. A contemporary chef favorite, white gazpacho is a perfect companion to an order of fish or tuna, all topped with tomato wedges.

Green Gazpacho: Stemming from Spain’s Huelva and Sierra Morena regions, this attractive gazpacho gets its color and flavor from ingredients such as cucumbers, parsley, basil, lettuce, green pepper, avocado, melon, mint, endives, coriander, onion, garlic, and jalapeño peppers for a boost of flavor. Too spicy for your customers? Simply balance things out with a dash of white balsamic vinegar or add some yogurt. 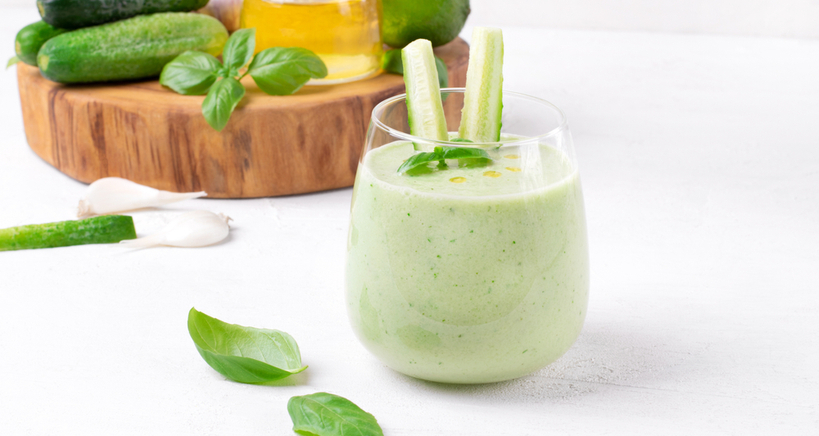 Low-Carb Gazpacho: This unique recipe is bread-free and is served immediately without being chilled. For a chunkier soup, dice all ingredients as usual, but purée only half of the mixture, then return to the soup. For a finer soup texture, increase the time that the ingredients spend in the food processor, or push the soup through a fine sieve. As it is low in carbs, it can be eaten as part of a keto-friendly diet.

Sweet Gazpacho: This fruity soup replaces the tomatoes with watermelon, sweet red bell peppers, pineapple juice, or honey, and is seasoned with ginger and mint. It’s refreshing, cool flavor makes this recipe perfect to feature as Summer Soup of the Day or Soup De Jour on your restaurant menu.

Not only is gazpacho known for its great taste, but it has also gained a rep for its many health benefits. These include:

How to Make Gazpacho

Preparing gazpacho via pestle and mortar was a time-consuming and cumbersome task. Since the advent of modern-day blenders, however, it’s not only easy to make gazpacho but you can also don your creative chef’s hat and play with the ingredients to achieve the desired flavor and consistency.

Today you can find recipes for:

And for a summer soup that stands out from the crowd, garnish your customers’ favorites with sour cream, olive oil, toasted nuts, crème fraîche, or leftover wedges of vegetables or fruit.

Cold Soup Ideas from Around the World

Over time, cold soup creations have given rise to some unusual recipes. If you want to go out of the box, consider: