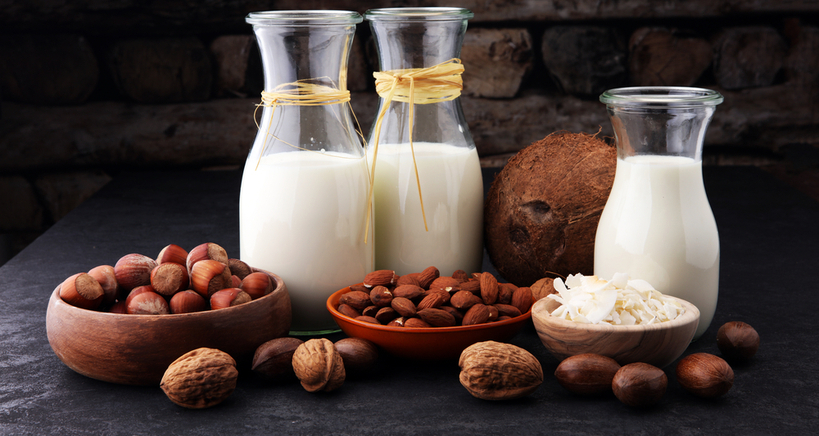 It was only a few years ago that the beverage industry witnessed the unprecedented rise of oat milk. Since then, there has been a proliferation of non-dairy milk alternatives. While cow milk is by no means obsolete, today’s expanded offerings include picks such as soy milk, almond milk, cashew milk, rice milk, coconut milk, buckwheat milk, macadamia milk, and many more.

The Rise of Dairy Free

Once available solely in stores selling all-natural products and relegated to the realm of health food enthusiasts, today’s dairy-free options are sold at local grocery stores across the globe and are being consumed by many. Also in the spotlight are other dairy substitutes, including plant-based yogurts, butters, cheeses, creamers, and ice creams. 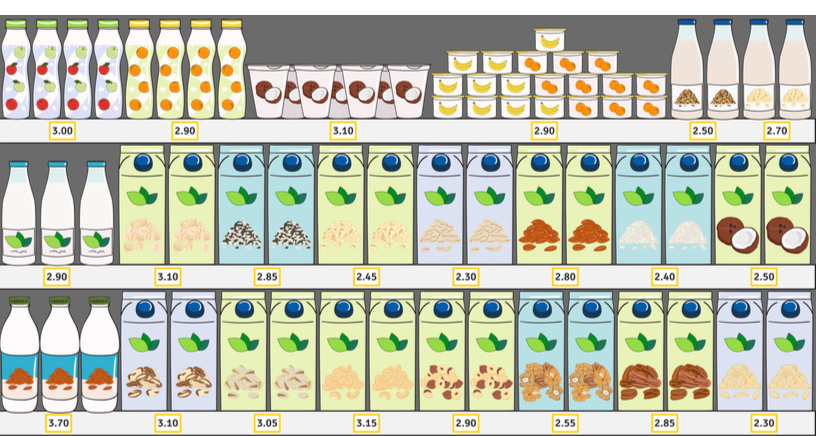 Why the heightened interest in non-dairy, and in milk alternatives in particular? Here are some of the explanations offered by the experts:

With the alternative dairy market expect to reach $25.12 billion by 2026, now is the time for forward-thinking restaurateurs and coffee shop owners to expand their offerings by adding milk substitutes to their menu and recipes.

If you work in foodservice and are looking for a way to boost traffic and gain an edge on the competition, it’s time to give your beverage menu a makeover — and to drink in every detail of the following Guide to Milk Alternatives 2021.

First, if you are wondering how milk alternatives stack up to traditional cow’s milk, here is the dish:

Contrary to popular belief, many plant-based options do not cut the mustard when it comes to matching the protein, calcium and vitamin D content provided naturally by cow’s milk. They also lack milk fat and the rich creamy texture consumers associate with dairy, leading some manufacturers to use artificial texturizers to fill the gap.

Milk Alternatives Have Other Nutrients

Yet, there is more than meets the eye in the new offerings and what milk alternatives lack in one area, they often make up for in another. Take pea milk for example. This new rising star in the industry is high in iron, an excellent source of plant-based protein, rich in omega-3s, cholesterol-free, and surprisingly creamy. Moreover, with demand for non-dairy at its peak, many modern milk alternatives come fortified with calcium and vitamin D. So, remember to read the label and shake well, allowing the vitamins and minerals to surface versus sink.

Not sure which non-dairy milks to add to your menu? Here are some pros, cons, and food for thought… 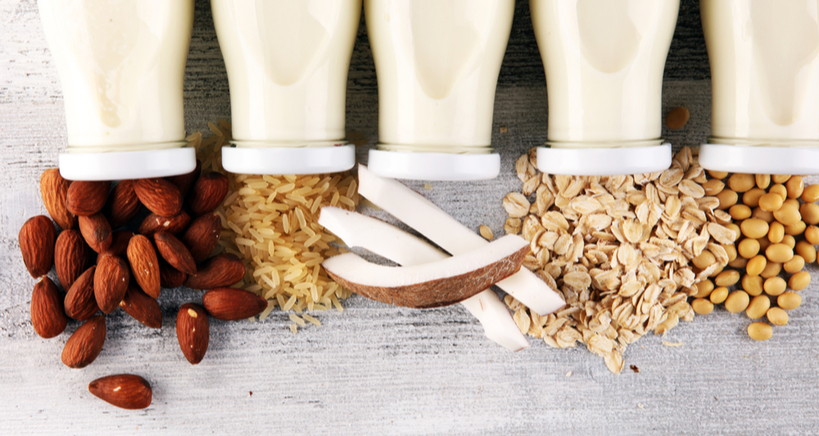 Soy Milk: Historically one of the first widely available milk alternatives, soy milk debuted during the First and Second World Wars when meat and dairy products were scarce. Sweeter, and typically cheaper than its counterparts, soy milk has the highest amount of protein (7 grams in one cup) and the greatest nutritional resemblance to cow’s milk. Often fortified with calcium and vitamin D, modern soy milk is available in light and low-calorie options and in flavors such as vanilla and chocolate. It is a perfect addition to both sweet and savory dishes.

Almond Milk: Most resembling skim milk, almond milk has a thinner consistency and is less expensive compared to its counterparts. However, made from water and ground almonds, it is not the number one choice for coffee shops and baristas since the beverage can separate when whipping up a foam. Albeit low in protein (1 gram per cup), it is high in calcium and its creamy texture makes it a chef’s favorite for white sauces. It is available in both sweetened and unsweetened varieties.

Rice Milk: With a reputation for being the sweetest natural milk alternative around, rice milk is the number one choice for desserts. At the same time, its similarity in taste to cow’s milk also makes it ideal for use in light sauces and soups. It can be easily found in a multitude of flavors, however a word to the wise for diabetics and consumers monitoring their blood sugar levels — rice milk ranks high on the glycemic index due to its high starch concentration.

Cashew Milk: One of the newer dairy alternatives starting to replace almond milk in the cooking world is cashew milk. Creamier, and with a more of a nut flavor, this versatile beverage is made from blending cashews with water and is most often used in ice cream recipes, broth recipes, and barista coffee blends. It contains 1 gram of protein per cup and is high in monounsaturated fatty acids.

Oat Milk: Oat milk’s burst in popularity was well deserved. A long-sought solution for people with nut allergies, oat milk is naturally creamy with a taste resembling that of whole milk. It is the number one milk substitute used in coffee shops, and chefs use unsweetened oat milk in savory dishes and sweetened varieties in desserts.

Buckwheat Milk: If you never knew buckwheat milk existed, you are not alone. Ironically, the nutritionally packed beverage contains no wheat whatsoever and is gluten free! High in minerals and antioxidants, one cup contains 1 gram of protein, 1 gram of fat, and 10 grams of carbohydrates. Increasingly being considered as a cow’s milk alternative, experiment with buckwheat milk in recipes for oatmeal, muffins, smoothies, and more.

Pecan Milk: Finally, welcome pecan milk into the mix and treat your customers to another natural and sweet-tasting non-dairy alternative. Boasting 3 grams of protein per cup, 4 grams of carbs, and 5 grams of fat, pecan milk is rich in several B-complex vitamins, vitamins E and A, and contains iron, phosphorous, magnesium, and zinc. Its slightly nutty flavor is becoming a hit when added to coffee and hot chocolate, or you can try pouring it over cereal for a breakfast menu delight.

Tips on Cooking with Milk Alternatives

Some non-dairy milks break up and separate under high cooking temperatures due to low amounts of the emulsifier lecithin contained within. To prevent this, add non-dairy milk towards the end of your recipe, or compensate by adding some cornstarch mixed with water to thicken the mixture and provide a more uniform consistency.

Making Your Own Homemade Milk Alternatives 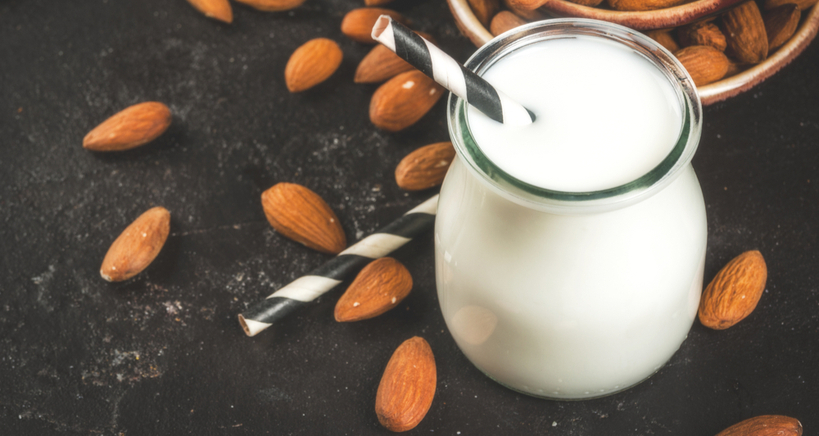 In addition to the gamut of non-dairy milks available for purchase, you can also try your chef’s hand at creating your own varieties. For example, here are instructions on how to make almond milk from scratch:

Made with coconut milk, this smoothie recipe is perfect for your restaurant or coffee shop summer menu. It can be featured as a healthy snack, dessert, or delicious breakfast item.