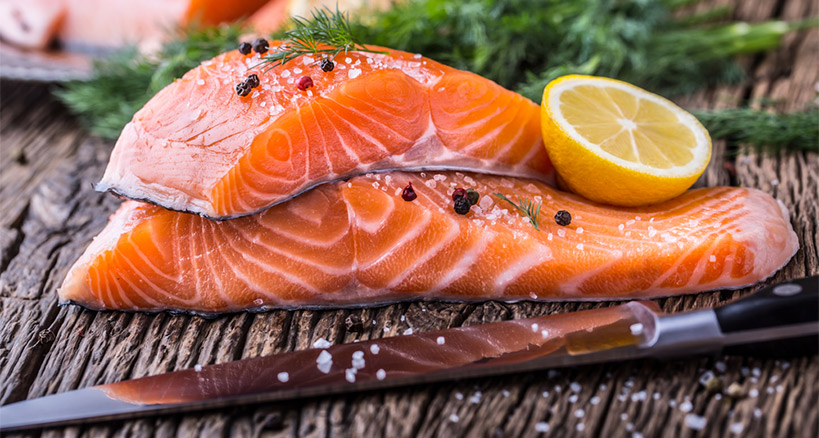 When it comes to foods that meet what are arguably the three most important criteria – taste, nutritional value, and ease of preparation – salmon heads the list. Salmon is delicious, it just about cooks itself, and it has more health benefits than we can keep track of. Salmon is also super-versatile – it can be baked, broiled, grilled, and poached, and with so little work on your part, it never fails to be delicious.

Salmon is an outstanding and unusual fish; outstanding because it’s incredibly tasty, and unusual because both fish lovers and non-fish lovers tend to like it. It’s a fatty, succulent fish with plenty of heart-healthy omega-3 fatty acids, plus a big dose of protein, and an abundance of vitamins. It’s readily available all year round, and, even the most inexperienced (or lazy) cook can prepare it in no time.

Salmon is the common name for fish in the order Salmoniformes. Salmon are “anadromous,” which means that most types of this fish are born in fresh water, migrate to the salt water of the open sea, and then return to fresh water to reproduce, or “spawn.” After living for years at sea, salmon travel a long-distance home to return to the river in which they were born in order to spawn. After spawning, all Pacific salmon, and about half of the other species, die within a few weeks. The salmon that do not die can spawn two or three more times.

Salmon come from the Atlantic and the Pacific regions, and the appearance of the fish varies according to species. Not all have the recognizable pinkish-orange hue that we associate with salmon; chum salmon, for instance, are silvery blue, while cherry salmon have bright red stripes. In fact, most salmon have one color when they live in fresh water and then change color when they live in salt water.

Salmon in the United States are found mainly on the Northwestern coastline as well as around Alaska. A century ago, there were wild salmon in the Atlantic, but today, for the most part, wild salmon come from the Pacific, and farmed salmon come from the Atlantic. These days, all wild Atlantic salmon stock has been eliminated or reduced to such low levels that they are no longer available for commercial use.

New England first began canning salmon in 1840, shipping it across the country to California. Just a few decades later, however, California was supplying the East with canned salmon. Some cans of pink salmon, although labeled as, “Alaskan wild-caught,” also may say, “Product of Thailand” (or another Asian country). This conflicting information is a result of the fact that when more pink salmon (the most abundant and least expensive wild salmon) is caught than can be canned at one time by a U.S. cannery, the extra salmon is frozen and shipped Asia to be processed and canned later on. That’s something to consider when buying canned salmon. 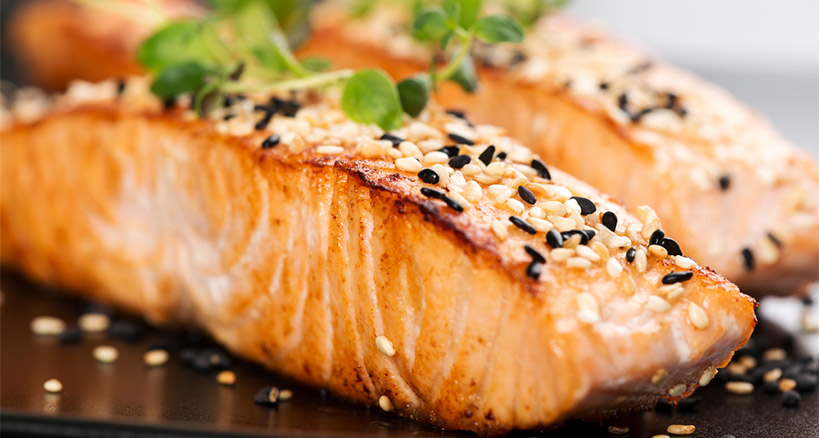 Salmon is one of the most nutritious foods on the planet. This fatty fish is loaded with nutrients that may help reduce risk factors for several diseases. Salmon is one of the best sources of omega-3 fatty acids EPA and DHA, which have been credited with several health benefits such as decreasing inflammation, lowering blood pressure, and reducing the risk of cancer. Eating two servings of salmon per week can help you meet your omega-3 fatty acid needs. Salmon is also rich in protein, which is an essential nutrient that we must get from our diet. Protein plays a few important roles, including helping the body heal after injury, protecting bone health, and maintaining muscle mass during the aging process. Experts have determined that for optimal health, our meals should provide 20 to 30 grams of protein, and a 3.5-ounce serving of salmon does just that, by containing 22–25 grams of protein.

Salmon is also an excellent source of B vitamins, which help turn food into energy, and reduce inflammation that can lead to heart disease. B vitamins promote optimal functioning of the brain and nervous system. Salmon is also high in potassium; wild salmon provides 18% of the required daily intake of potassium per 3.5 ounces, while farmed salmon provides 11%. Potassium helps control blood pressure, which in turn helps reduce the risk of stroke.

The antioxidant astaxanthin gives salmon its red pigment, and it has many powerful health benefits. It helps to reduce LDL cholesterol and increase HDL (good) cholesterol, and is said to work in parallel with omega-3 fatty acids to protect the brain and the nervous system from inflammation. Sockeye salmon provides the highest amount of astaxanthin, about 3.8 mg of per 3.5 ounces. Consuming salmon may also help you control your weight by reducing appetite, boosting metabolic rate, and decreasing belly fat. Note that a 3.5-ounce serving of farmed salmon has 206 calories, and wild salmon has only 182 calories.

There is an ongoing controversy about which type of salmon is healthier: wild salmon or farmed salmon. It is generally accepted that wild is better than farmed, as many farms use crowded pens where salmon are easily infected with parasites, and where the fish are often treated with antibiotics. In addition, it can take as much as three pounds of wild fish to feed one pound of farmed salmon, which has a significant impact on the general fish population. Wild salmon, on the other hand, eat what nature provides them, which is eco-friendlier.

Other experts maintain, however, that farmed salmon contains fewer parasites than wild salmon, and that wild salmon may contain more contaminants than farmed salmon. This is because wild salmon can contract parasites from their prey, while parasites can be controlled and kept to a minimum among farmed salmon. In other words, there are two sides to the wild vs farmed controversy, and plusses and minuses to both types of salmon.

Since farmed salmon is available all year round, it is usually fresher than wild salmon; the availability of wild salmon, on the other hand, is seasonal, which is why it is often supplied to the market as frozen product. Environmentally speaking, there is a view that to protect free-swimming (wild) salmon, it makes sense to eat farmed fish instead; however, the fisheries say that there is no danger to the wild-salmon population and that they are able to maintain fish populations at a sustainable level. 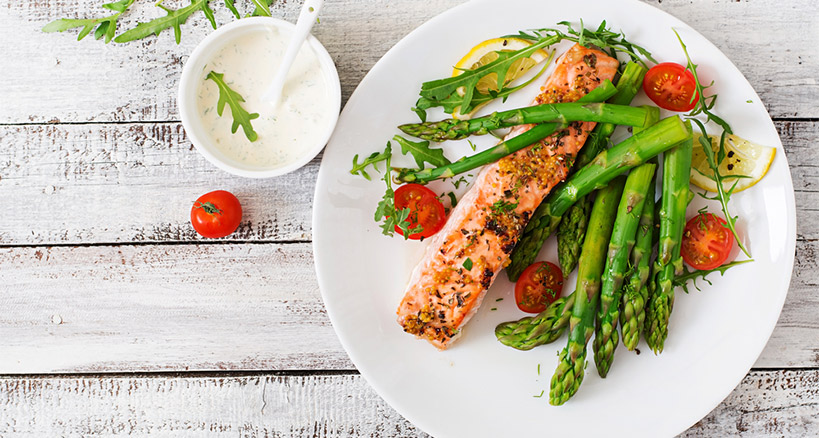 Of the six types of salmon that are harvested in and around the waters of North America, one is from the Atlantic Ocean – called the Atlantic Salmon – and five are from the Pacific Ocean: Chinook, Chum, Coho, Pink, and Sockeye salmon. The six species of North American salmon vary in price, color and taste, but they are all are healthy choices

Atlantic Salmon – Known also as black salmon, this Atlantic salmon doesn’t need salt water to live. The species is in decline in the U.S. and is on the Endangered Species List.

Chinook Salmon – The Chinook, also known as the King Salmon, is the largest of the salmon species and can reach a weight of more than 100 pounds (though the average is 10-15 pounds). This type of salmon is prized for its high fat content, rich omega-3s, and silky texture. Chinook salmon, which can live up to seven years, are found mostly in Alaska and along the West coast of the United States.

Chum Salmon – This fish is found in Alaska and by the Northwest tip of the United States (near Washington State). This type of salmon is used most often in canning or smoking.

Coho Salmon – The Coho salmon, also known as Silver, is one of the most sought after species and can be found in Alaska and down the U.S. West Coast. It has a relatively mild flavor and is lighter in color than other species. The average size of a Coho is 6-12 pounds.

Pink Salmon – Also known as “Humpies,” the pink salmon is the most abundant species, although the average size of a Pink salmon is only 3-5 pounds.

Sockeye Salmon – Also known as “Reds,” this is the most colorful of the species and can survive in lakes and other freshwater bodies. The Sockeye is oily, making it perfect for grilling, and it has deep-red flesh and a strong flavor.

A Word About Lox

Smoked salmon comes in a variety of forms, with the most popular being lox. The name “lox,” from the Yiddish word laks, meaning salmon, originated in New York. Lox was traditionally made only from the belly of the salmon, although other parts of the fish are now used. For lox, the salmon is salt-cured or brined, but never cooked or smoked, so it has a very silky and translucent texture. It is a traditional topping on a bagel, along with cream cheese. 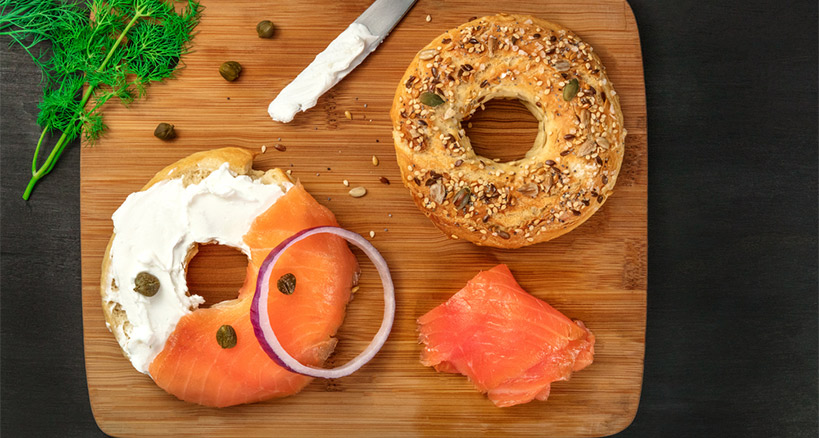 Fresh vs Canned or Frozen Salmon

According to The New York Times, which quotes the United States Department of Agriculture (USDA), “fresh and canned fish have roughly the same nutritional value.” Canned salmon is relatively cheap and is a tasty and convenient way to increase intake of protein and omega-3 fatty acids. Canned salmon is particularly handy for use in salmon croquets and fish loaf.

Frozen salmon will keep for up to four months in the freezer. When ready for use, it must be defrosted overnight in the refrigerator (and not outside the fridge). Salmon that is intended for a supermarket’s freezer is flash-frozen as soon as it’s caught, which means that it contains all the nutrients of fresh fish. Opting for frozen fish also increases the varieties you have available, because you don’t have to wait for your favorite kinds to be in season.

Salmon is incredibly delicious; it has a unique, delicate flavor with a less fishy taste than many other fatty fish. It is also extremely versatile. It can be steamed, smoked, grilled, baked, or poached, and it can be served raw in sushi and sashimi. Salmon is a nutritional dynamo that provides an array of impressive health benefits. Including this fantastic fatty fish as a regular part of your diet can improve your quality of life – it’s a natural choice for your health and well-being.