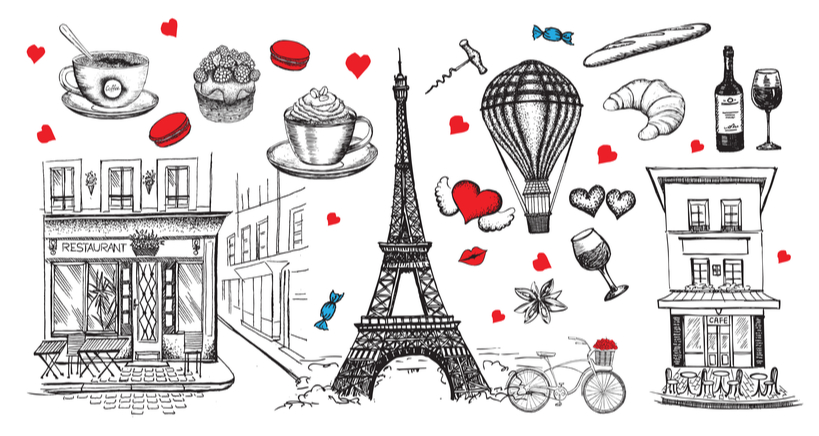 So why is it that professional chefs ‘sauté’ rather than cook in oil, ‘purée’ rather than blend, and compete so that customers choose their catering services to host the next grand ‘soirée’? Furthermore, given the widespread popularity of French haute cuisine, what secret tricks of the trade can help your restaurant’s chefs and bakers create mouth-watering, traffic-attracting pièces de résistance?

To answer these questions, let’s travel backwards in time to learn about French cuisine history and discover how it became so iconic. Then we’ll offer some hot insiders’ tips on how to perfect your favorite French recipes so that customers keep clamoring for more.

The modern concept of haute cuisine refers to a version of cooking far richer than the average ‘home cooking’ and its roots trace back to the days of Louis XIV and the political upheaval of the French Revolution. With the collapse of the old order, many royal chefs lost their jobs, giving a mass of French culinary professional’s free reign to become independent and spread their influence across the royal kitchens of Europe. 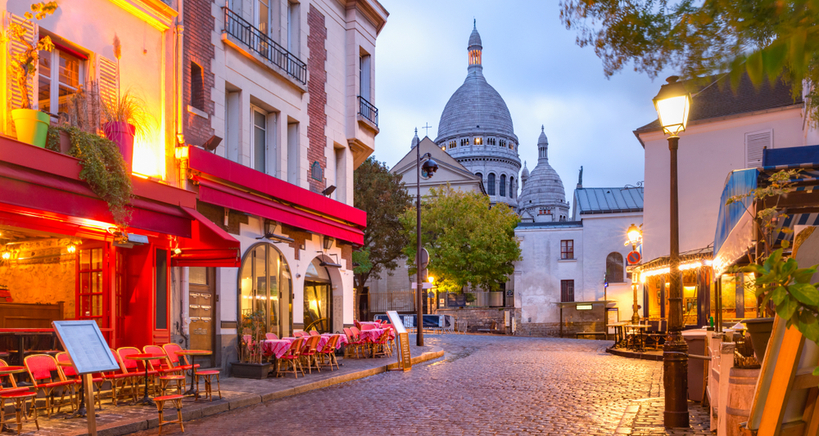 In 1651, François La Varenne (aka the father of haute cuisine) published Cuisinier François (The French Cook), a seminal book on French cooking that set down a codified, systematized set of rules and principles for food preparation. In 1903, chef Georges Auguste Escoffier made his mark on the culinary scene when he updated La Varenne’s rules and principles in Le Guide Culinaire. The working kitchen was now divided into five stations with specific professional roles responsible for different components of a dish. For example, a saucier made the soups and sauces, a garde manger was in charge of the preparation of cold dishes such as salads, pates and caviar. It also advocated the use of thick, rich sauces, a heightened role of vegetables, and the separation of sweet and savory flavors. Cementing France’s place at the top of the culinary firmament, the system is still taught in culinary schools today and considered the golden standard in 5-star hotels.

How to Make the Perfect Soufflé 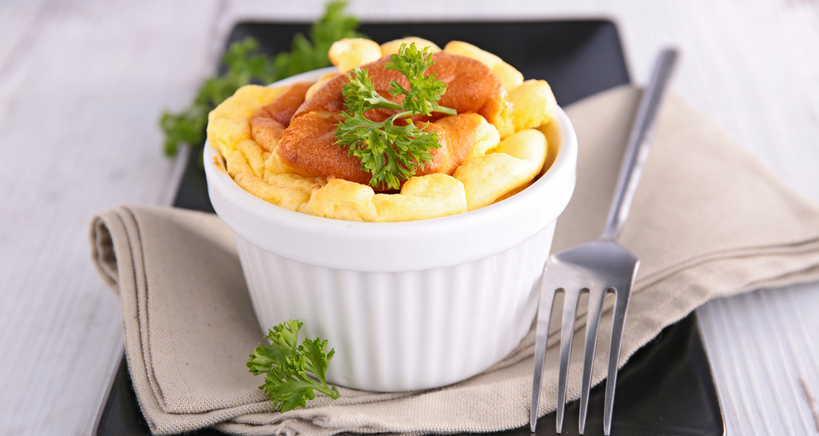 “Soufflé” has become synonymous with French fine dining. Considered the equivalent of a Picasso in the art world, the key ingredient to making the perfect soufflé is actually air! In fact, the word itself means to breathe, blow, puff, or inflate. More specifically, air trapped in the mixture while beating the egg whites creates air bubbles that expand in the oven. This gives rise to the airy architecture and famous cloud-like structure of a soufflé. And here’s an insiders tip for all burgeoning chefs: Did you know that the egg yolks are specifically removed because their fat content prevents air bubbles from forming?

Chef Antoine Beauvilliers, in his high-end Parisian restaurant in 1783, is credited with being the inventor of the soufflé. The recipe has since been updated and perfected, giving rise to scores of both sweet and savory versions that continue to be devoured by consumers worldwide.

What are some preparation basics and how do sweet and savory varieties differ? In a nutshell, all soufflé recipes begin with beating the egg whites until stiff peaks form, creating the airy shape soufflés are famous for. Next, the egg yolks are beaten and combined with other ingredients to form a billowy dish that can be served as a savory main meal (i.e. with vegetables, cheeses, sauces, and/or spices) or as a sweet dessert filled with chocolate or berries or topped by ice cream, hot sauce, berry puree, or fresh crème.

Technique is the name of the game when it comes to making the perfect soufflé, so here are some professional tips to help you get it right!

If you’re looking for an iconic French food that sells like hot cakes, it’s time to roll up your chef’s sleeves and roll out the dough for some sweet and savory crepes. Described as a thinner, more delicate version of pancakes (also made from eggs, milk, flour, and butter), the word “crêpes” gives reference to their slightly ruffled edges. The dish is so popular in France that February 2nd has been deemed Le Jour Des Crêpes or The Day of the Crepe, when everyone simply eats crepes!

Stories of how it all began date back to 13th century Brittany, France, when a housewife purportedly spilled some thin buckwheat porridge onto a hot, flat stovetop. To avoid wastage, the cooking ‘mistake’ was devoured and deemed delicious. 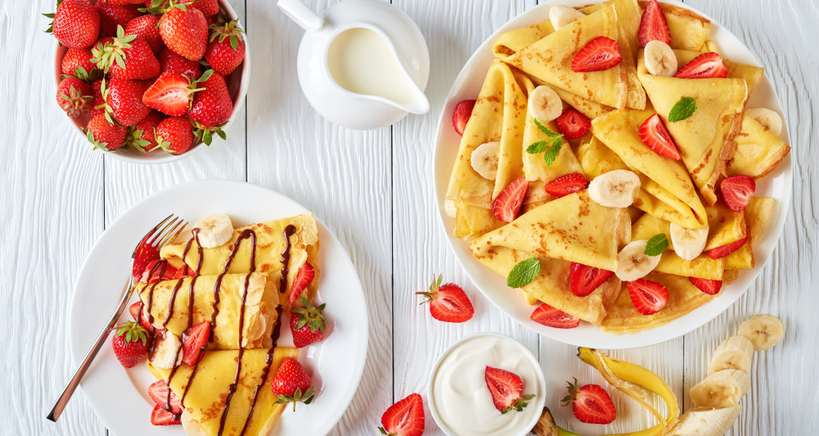 Since then, many varieties of the crepe have been created, including both savory and sweet varieties. Their sheer versatility makes them both a chef and consumer favorite.

So, as you experiment with different recipes, feel free to dress or stuff your recipe with any toppings or fillings the palate desires. Here are some ideas:

Expert Tip: How to Make the Perfect Crepe: To master the art of crepe-making like a French master chef, fold the crepe edges, rather than roll them, to keep their toppings inside.

Enjoying worldwide popularity, the French tart known as quiche, consisting of a pastry crust filled with savory ingredients like milk, eggs, cheese, vegetables, and seafood, is in fact not a French creation at all! Rather, they are said to have originated in Germany, where in the early 1500s they were called ‘kuchen’, meaning ‘cake’. The recipes were adapted by the French, especially in the region of Lorraine, around 1853. They emerged in England in the 1950s and finally took America by storm in the 1970s.

Delicious warm, cold, or at room temperature, quiche is commonly consumed for brunch or lunch, while individual, small quiches can serve as specialties at parties or as a finger food at other fine dining occasions. Appearing like a lid-less pie, they are baked in the oven and are typically high protein, vitamins, and minerals.

There are many great reasons to add croissants to your restaurant menu!

Lamination: The Art of Croissant Making

Learn to make croissants like a pro by mastering the technique of lamination. In laminating, butter is rolled into the dough over and over again to create super thin layers that alternate between butter and dough. Scientifically, this is what gives the classic croissant its famous flaky texture and signature ‘honeycomb’ internal structure.

If your customers are clamoring for some flavored varieties, cater to their cravings by slicing baked croissants in half and spreading a thin layer of one of following decadent fillings: chocolate spread, pastry cream, mashed pumpkin pie, goat cheese, browned onions, fresh fruit, gelato.

Finally, to add a bona fide French national treasure to your eatery’s menu, think French Onion Soup. Originating in France in the 18th century, the classic is typically made from broth, caramelized onions, white wine, bay leaves, and thyme, topped by French bread and cheese. In France, however, the dish is simply called “soupe à l’oignon,” or “onion soup.”

Finally, to jumpstart your French Cuisine menu update, treat your customers to the following recommended recipe.