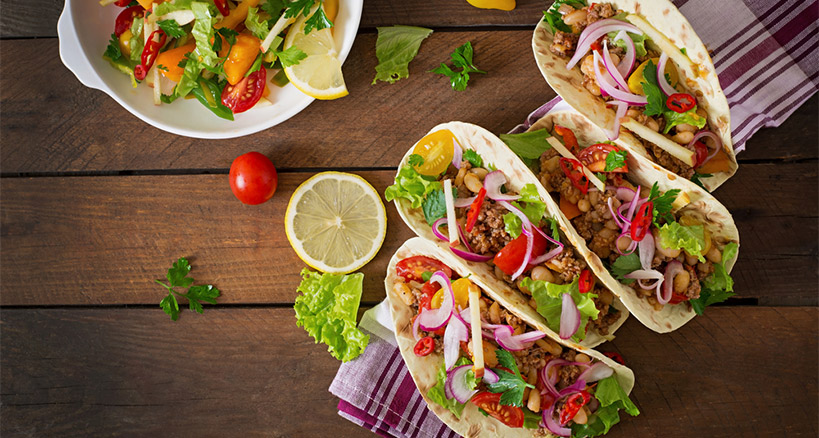 Catering trends are all about finding the new and creative sides of cooking. International cuisine never goes out of style, with Asian, Italian, and French-inspired dishes remaining popular at catered events. However, at the same time that the interest in ethnic foods remains high, American cuisine is waiting in the wings to be the next big thing. In fact, while all eyes were on Indian curries and Thai noodles, Southwestern cuisine has snuck up on the unsuspecting caterer and has taken center stage.

What is Considered the Southwest?

The United States Southwest is an area that spreads from south Colorado and southwest along the Rio Grande River to Arizona; it also includes New Mexico and Southwest Texas, which is the area south and west of the city of San Antonio. This sprawling area that covers four states – Southern Colorado and Texas, Arizona and New Mexico – was settled by Spanish colonists between 1540 and 1598, giving Southwestern food bold, Spanish roots. Alongside the Spanish flavors, the indigenous Americans – Apaches, Navajos, and Pueblos – contributed their foods to the cuisine of the region, making Southwestern cuisine a fascinating combination of tastes and cultures.

The Mexican connection can’t be ignored when it comes to the Southwest of the United States. The long border with Mexico has had a profound influence on the cuisine of the region. Throw into the mix the connection that Texas has with the cattle industry, and it’s not surprising that Mexican cuisine and beef are the two major staples of Southwestern food, also known as Tex-Mex cuisine. 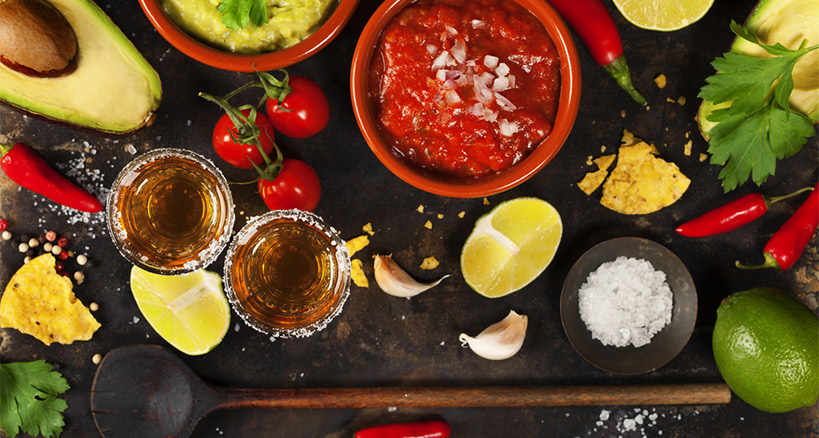 Back in the day, Indigenous Native American foods were corn, tomatoes, beans, avocadoes, and squash; the Spanish colonists contributed culinary traditions such as chili and rice-based dishes. Today, Southwestern food is all about fusion; it features the beef that is an intrinsic contribution of the area’s ranches, is heavily influenced by Spanish and Mexican flavors, and is accented with spices and produce native to the Americas like chili peppers, corn, and tomatoes. The food attributed to this region is hearty and comforting and tends to fall back on the same ingredients: chicken, beans, corn, avocado, fried tortilla strips, and some kind of hot sauce. Chili peppers are a common ingredient, along with cilantro, cheese, and sour cream. Southwestern cuisine is at once foreign and familiar, exotic and local… and, of course, loaded with flavor and oomph.

What is commonly thought of as the core of Southwestern cuisine–tacos, enchiladas, burritos, tostadas and tamales—are actually just snacks or appetizers. Traditional main dishes are slow-cooked stews–like chili con carne or bean chili–and slow-cooked meats, like carne asada, which is a slow-roasted meat that has been marinated. Vegetables are an important part of Southwestern food and are often served diced and mixed together in salsa, a tomato based sauce that adds a kick to Southwestern foods.

Chilies are at the heart of the Southwest food tradition of spicy dishes – both the dish and the pepper. “Chili” is a stew of beef, tomatoes, spices and chili peppers, while “chilies” are the fruit of the chili plant. Chili peppers in Southwestern cuisine are either green or red; green chilies are picked early while red chilies are picked fully ripe. They are often dried and hung and are commonly used to decorate restaurants. They can really “spice” up your presentation if you’re serving Southwestern food at a catered event.

The chili dishes that are the heart and soul of Southwestern food are red chili “con carne” and green chili con carne (con carne means with meat). For red chili, meat – usually chopped beef – is simmered in a sauce of dried red chilies, cumin, coriander, and oregano, while green chili consists of meat that is simmered in fresh green chilies, onions, garlic, and tomatoes. Traditionally, beans are served as a side dish with rice or tortillas; untraditionally but commonly, beans are cooked into the chili.

The great thing about serving chili at a Southwestern-themed event is that you can whip up a big batch that serves lots of people; and that the chili cooks while you can do other things. Renowned chef Jamie Oliver has come up with an easy chili recipe to add to your repertoire. It relies on chili powder instead of fresh chilies, which simplifies the preparation. 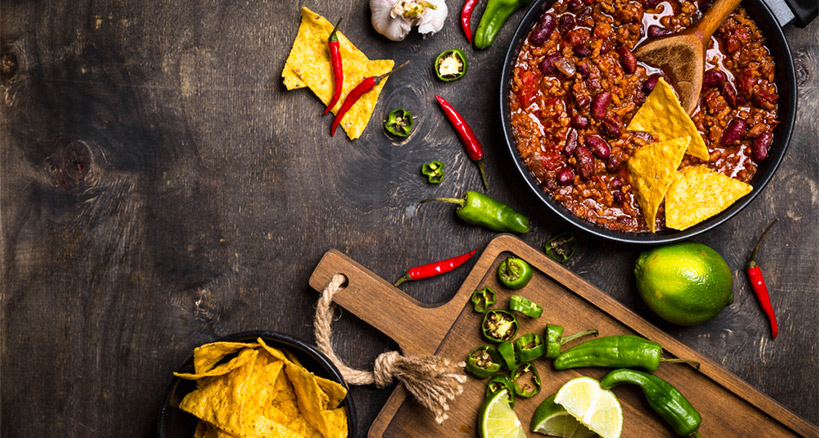 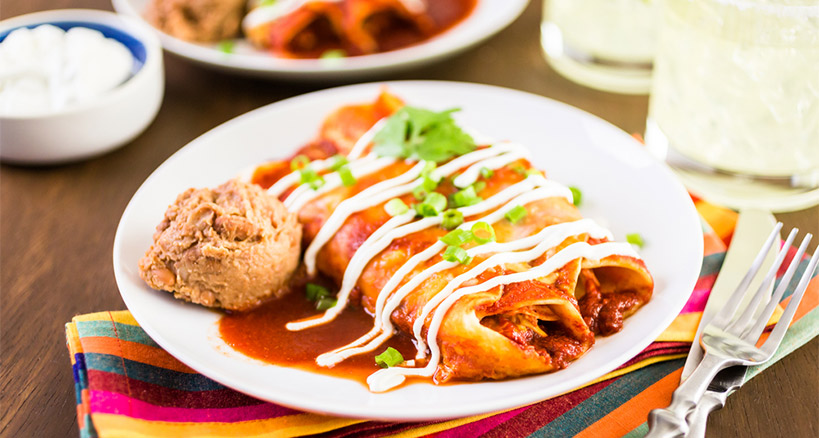 Along with chili, the most beloved and versatile Southwestern contribution to American cuisine is the burrito – a soft flour tortilla wrapped around a hot, savory filling. There is virtually no difference between a burrito and a wrap except that the burritos were here first and the wrap has gotten a reputation for being a healthier version of a burrito. Also, burritos are usually bigger, fuller and more substantial, filled with meat (possibly prepared chili), rice, beans, lettuce, tomatoes, salsa, corn, and so on. Burritos are bound to be a huge hit at your Southwestern-themed event, so be sure to prepare many of these popular items in advance.

Contrary to popular belief, there is a difference between burritos and tacos and it is essentially the size. Burritos are usually much larger than tacos and can be consumed as an entire meal. Tacos are made with warm corn tortillas wrapped around a single filling (fish or pulled beef, for instance) and often garnished with salsa or guacamole. Tacos are an ancient food that has been around for hundreds of years, while burritos are relatively new additions to the Tex-Mex menu. Another difference is that while corn tortillas are used for tacos, flour tortillas are preferred for burritos because corn tortillas tend to split and fall apart due to the large size of the typical burrito.

Enchiladas are prepared along the same lines as burritos and tacos; they also use a corn tortilla as a wrapping material around various types of filling and are enclosed by a sauce of chili pepper, and then baked. To add some variety to your Southwestern style meal, offer egg-topped New Mexican Red Stacked Enchiladas, especially if you’re catering a Southwestern breakfast buffet.

Most of the ingredients for Southwestern cooking are neither exotic nor hard-to-find. The basics are garlic, peppers, and onions, beans of all kinds (particularly, black and pinto), corn kernels, and avocadoes. Cornmeal is another important ingredient – especially if you’re going to be making your own tortilla chips – and blue cornmeal is a trendy version that is usurping the place of traditional yellow cornmeal. Blue cornmeal is stone ground from whole grain blue corn and it can be used instead of yellow cornmeal for a colorful twist on cornbread or homemade blue corn tortilla chips. Blue cornmeal has a slightly nuttier flavor than its yellow counterpart and its use will add a unique twist to your Southwestern-style event.

Fresh chili peppers contribute the traditional kick to Southwestern food, though you have to learn to use control and care when incorporating fresh peppers. Jalapeños, also called chipotle chilies, are a very hot chili pepper that can be eaten raw or cooked. Serrano peppers are used the same way but are smaller, thinner and extremely hot. Remove the seeds and ribs to control the heat.

Cilantro – also known as coriander – is a love-it-or-hate-it kind of herb that is found in many Southwestern recipes. Many people who have an aversion to cilantro use parsley instead but the results are vastly different (albeit preferred by cilantro-haters). Cilantro is chopped and used in an assortment of dishes, including chili, salsas, soups, and salads.

Get Aboard the Southwestern Train

Southwestern cuisine is both bold and exciting, All-American yet exotic. It incorporates many cultural influences, including Native American, Spanish and European. It’s a cuisine that’s satisfying and straightforward, and is part of our craving for real, unpretentous food. The boom of Tex–Mex dishes has introduced cooks to interesting ingredients that are used to prepare this type of food, such as cilantro, blue cornmeal, and chilies of all varieties. Spice up your catering menu with Southwestern cuisine and watch your business explode.