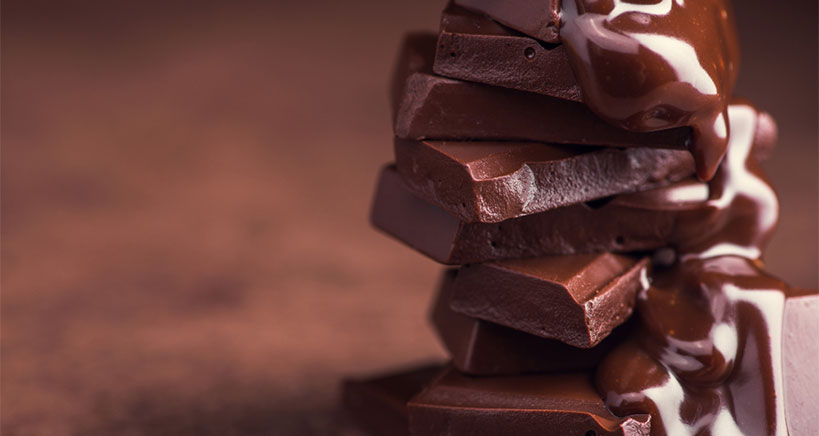 Attention chocoholics, chefs, and anyone working in the foodservice industry: If you’re wondering what’s new in chocolate these days, you are in for a treat! There is a new kid on the choco block and the decadent temptation has a new look, a new texture – and yes, even a new flavor!

But before we indulge in the latest sweet sensation, let’s take a quick walk down memory lane and look at the state of an industry which has more than passed the test of time and taste…

In the words of Charles M. Schulz: “All you need is love. But a little chocolate now and then doesn’t hurt.” Ah, the sweet sound and flavor of even just hearing the word “chocolate…” By far one of the worlds’ oldest and most beloved aphrodisiacs, it’s no wonder that the current staples – dark chocolate, milk chocolate, and white chocolate – are a part of almost every menu and a feature item in so many desserts. In fact, according to market research firm Datassential, eateries continue to use chocolate in new and innovative ways, a fact indicative of its enduring popularity.

Larry Wilson, vice president of customer relations at the National Confectioners Association (NCA), further notes that whether as a stand-alone food or as a recipe ingredient: “Chocolate is a very popular product …It grows in demand during good economic times and is recession resistant.”

Currently, dynamics in the chocolate industry are reflecting general food trends for 2019, where consumers are increasingly interested in the content of what they are eating: “People are looking more at specific types of foods,” says Maeve Webster, Datassential senior director. “It’s not just tomatoes, but heirloom tomatoes; not just coffee, but dark roast. People want to know the specifics of what they are eating, so generic chocolate is not as impactful as it was.”

Well, as of last year, you can say goodbye to ‘generic’ in the wonderful world of chocolate. On September 5, 2017, at a special launching event in Shanghai, Peter Boone, Chief Innovation & Quality Officer at Barry Callebaut’s, announced the grand debut of Ruby Chocolate, also dubbed ‘the fourth type of chocolate.’ Offering consumers an entirely new taste experience, the new phenomenon is not bitter, milky or sweet, and the color is neither black, white, or a hybrid. Rather, the pioneering dessert is named after its characteristic red hue while its flavor is being described as of fusion of berry-fruitiness and smoothness. According to industry expert Angus Kennedy in an interview with The Sun, it is “…very different and clever stuff. It’s refreshing and has a light, creamy texture.”

If you are a die-hard chocolate fanatic, here is another fascinating item of trivia for you to savor: Not only is Ruby the only type of chocolate created since white chocolate emerged on the scene in the 1930s, but contrary to expectations, no coloring, berries, or berry flavors are added in its creation. Ruby chocolate’s all-natural flavor comes from the ruby cocoa bean itself!

And now some tasty tidbits about the masterminds behind what they hope will become the next pièce de résistance on menus everywhere: The Barry Callebaut Group, headquartered in Switzerland, is one of the largest manufacturers of chocolate and cocoa products in the world. Listed on the SIX Swiss Exchange since 1998, it came into being after a merger between Belgian chocolate maker Callebaut and French chocolate producer Cacao Barry.

According to Boone, the firm wanted to appeal to millennials, responding to the growing demand among younger consumers for luxury products. In his own words:

“We’re looking forward to working with our partners on introducing this innovative breakthrough to the market and making the new Ruby chocolate category available to chocolate manufacturers and consumers around the world as the fourth reference next to dark, milk and white chocolate. Consumer research in very different markets confirms that Ruby chocolate not only satisfies a new consumer need found among millennials – Hedonistic Indulgence – but also high purchase intent at different price points.”

So, what’s been going on since the firm’s grand 2017 revelation? At the time, the plan was to provide the product to chocolate makers but not to sell directly to consumers. This meant that Ruby would not be available in stores for about another half a year. And, indeed, on January 19, 2018, the new chocolate went on sale for consumers online and in South Korea and Japan in the form of a new flavored Kit Kat bar priced at USD $3.60 (400 yen). This was followed by ruby chocolate’s European debut on April 13, 2018 (introduced by Fortnum & Mason), and its United Kingdom launch by Kit Kat a few days later. 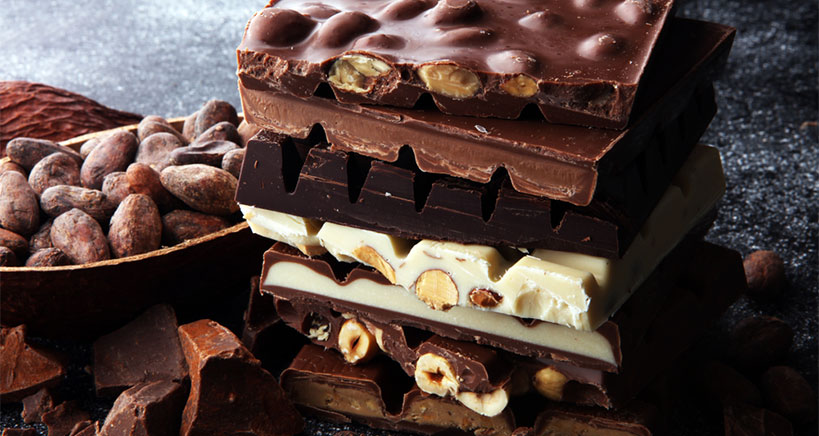 Chocolate and Your Health

What else is new in chocolate? When it comes to your health, here are the latest updates. Studies examining the health benefits of chocolate have long shown that dark chocolate, in particular, with its rich flavanoid content and antioxidant activity, is good for your heart. In addition to its cardiovascular advantages, scientific research continues to reveal exciting brain-function benefits, deeming chocolate a memory booster and mood superfood, as well as an anti-inflammatory and anti-aging agent.

Scientists attribute these therapeutic properties to chocolate’s high percentage of ground cacao, which contains a mixture of medicinal phytochemicals called polyphenols (mostly flavanols and proanthocyanidins) and methylxanthines. These compounds are believed to be responsible for chocolate’s mood-enhancing effects, which have been shown to decrease symptoms of anxiety and depression while enhancing feelings of contentedness and calmness. They are also believed to increase blood flow to the brain, promote the formation of new neurons, enhance connections between neurons, and protect neurons from free radical damage. In fact, a study published in the medical journal Hypertension, “Cocoa, Cognition, and Aging (CoCoA)”, chocolate was shown to improve cognitive function in both healthy young adults and in the elderly with mild cognitive impairment who consumed a daily cocoa drink containing high levels of flavanols. Moreover, even single doses of high-flavanol dark chocolate have resulted in an improved performance in memory and other cognitive tests.

What’s new in chocolate recipes? A lot! If you work in the restaurant or catering business or own any type of foodservice, it may be time for a chocolate menu reboot. In fact, according to industry experts, successful eateries are incorporating chocolate into innovative new menu platforms to attract the ever-hungry chocolate-loving crowds and to boost their biz.

When it comes to desserts, the traditional chocolate fanfare no longer satisfies. Instead, yesterday’s favorites are receiving a modern-day facelift as staples are kicked up a notch with new twists on old classics. To give you a tantalizing taste of some of the latest chocoholic delights, feast your eyes and stomachs on some of the following mouth-watering menu ideas, using them to stir your own creative chef’s juices.

Finally, don’t forget to kick your coffee beverage offerings up a notch with blends such as Starbucks’ Double Chocolaty Chip Frappuccino Blended Crème.

Gone are the days when chocolate recipes were limited to brownies, cookies, cakes, and cupcakes. Instead, forward-thinking chefs are incorporating small amounts of chocolate into main dishes and entrees, giving rise to a new and exciting menu of savory chocolate dishes, such as:

Finally, to help satisfy your sudden craving for all things chocolate, here are two easy recipes that are sure to be an instant hit in your restaurant or catering business. 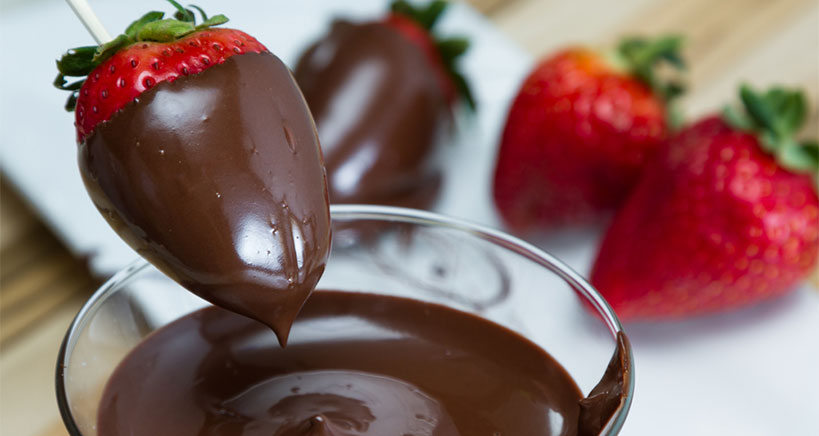 This to-die for recipe can serve as a dessert, appetizer, or as a filling for a no-bake chocolate cheesecake: 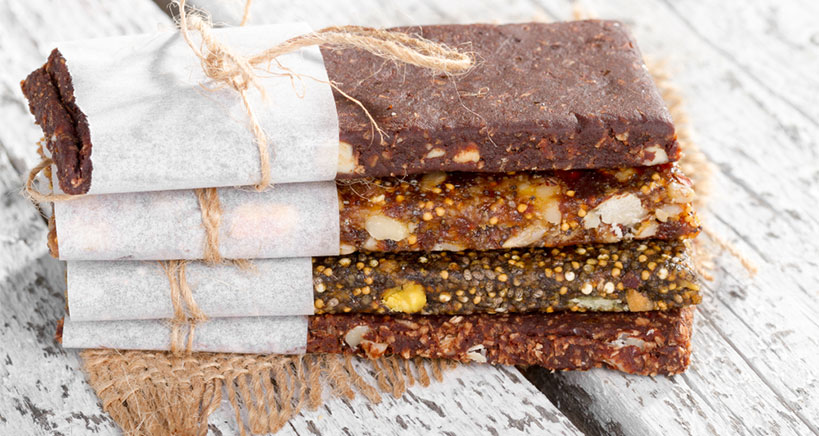 Made with apricots, coconut, pistachios, and cranberries, these dried fruit chocolate bars are gluten free and easy to prepare (alternatively, you can vary the recipe by using any type of dried fruit or nuts desired)